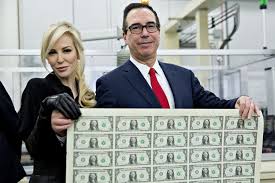 This picture really says it all. Here is the secretary of the treasury, the former head of Goldman Sachs and hedge fund founder, impressing his Marie-Antoinette of a wife with his signature on the new dollar bill.

This right at the time when a new tax law has just been passed that will ultimately benefit……the wealthy! And giant corporations, of course. Wall Street and the capitalists are laughing all the way to the bank. This tax overhaul will…

…give corporations and the very wealthy trillions of dollars in tax cuts, driving up the deficit and setting the stage for a massive assault on basic social programs such as Medicare and Social Security. (WSWS)