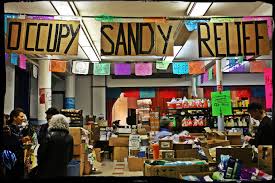 If newspapers were to be believed, natural disasters bring out the worst, not the best in people. Research in environmental and social psychology texts say the opposite is true. The overwhelmingly majority of the time people are heroic. The activists in New York during Occupy Sandy in 2012 both built on this heroic behavior and gave it a radical twist. This short podcast should be inspiring for demonstrating ways that socialism will arise, as capitalism sinks into economic and ecological disaster.