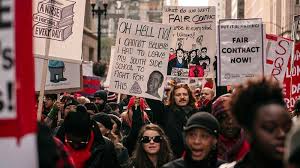 The New York Times is excited about reporting a global “rage” when it comes from outside the United States, especially from Hong Kong. But 48,000 auto workers on strike apparently does not count for anything. Neither does the Chicago strike of 32,000 teachers. As for the causes of the global protests, the NYT points to elites’ control over resources. What they ignore is that the gap that separates the wealthy from the poor in the U.S. is among the highest in the world.