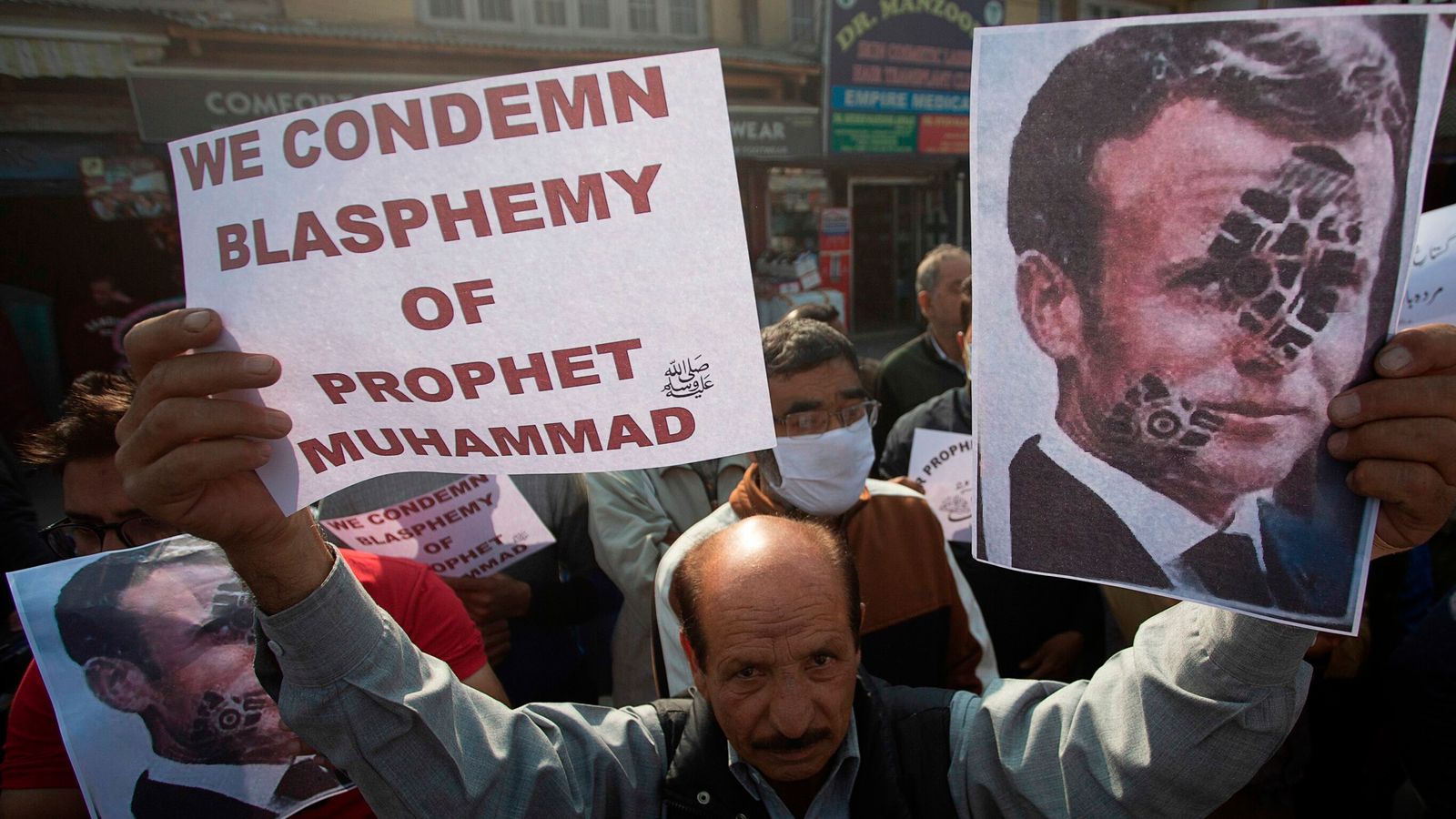 The October 16, 2020, slaying of French civics teacher, Samuel Paty, drew intensely impassioned responses from the French state, members of the society and, specifically, the Muslim immigrant community, the teacher having shown a naked caricature of the Prophet.  Displaying this image from the infamous Charlie Hebdo magazine crossed a “red line” for faithful Muslims. Therefore, the conflict between the Muslim community (3.3% of the population) and the dominant French society invoking the firmly held principle of secularism and separation of church (religion) and state mushroomed.  However, such a heated conflict elicits many questions.

On October 16, 2020, M. Samuel Paty, a civics teacher in a middle school in France, fell victim to a brutal murder caught in a conflict between the French practice of secularism and the rage of fundamentalist vengeance. For his having shown Charlie Hebdo cartoons, one being a depiction of the Prophet with genital exposure, religious Muslims were outraged for their children attending that school.  Abdoullakh Anzorov, a Chechen youth from outside that school, exacted the ultimate vengeance with Paty’s beheading.  This act being not an isolated incident, it is important to trace the escalation.

The principle and practice of laïcité, a social model in law for France since 1905, guarantees the rights of religious freedom for religions and individuals thereof, while maintaining the secular state’s distinct separation from religious influence and the power of any clergy.  Not to be defined by atheism, it advocates secularity, a view based on “this-world” terms, entrenching the right of freedom of speech. Thus, the law, dating from 1905, allowed, even encouraged, the naked caricature as a teaching aid in support of the lesson directed at all students, including Muslim. For most, laïcité is to be an absolute principle.

However, Dr. Alain Gabon, professor at Virginian Wesleyan University, has called Macron on his response by itemising the president’s abrogation of the entrenched law which he purports to be protecting. In fact, Gabon accuses him of enhancing separatism by treating Islam as a distinct threat beyond other religions, hence, separately. However, officials of the French Council of Muslim Faith have signed a “Charter of Principles” outlining terms and conditions that would pacify Islam according to the ideals of the Republic. (1)  He writes:

…besides the extreme violations of freedom of religion and the brutalisation of Islam, the charter is also a glaring violation of French laïcité – a principle the Macron government nonetheless claims to uphold. Based on the 1905 law on the separation of church and state, French laïcité includes three sacred principles that are not open to interpretation: freedom of conscience and religion, the separation of church and state, and equal treatment by the state of all religions. Macron is trampling on all three pillars.

Islam will be a special case before the law.

What is the message to the youth? With this, they may sup at the trough of a statist hegemony as re-educated Muslims, their practice dictated not from the authority of their community leaders but of a government department, as marginalisation becomes official – hardly a prescription for peace and harmony, or laïcité.  Neo-colonialism is not dead. As Khalid Hajji, a recognized professor of humanities, has written: (2)

My long experience of working with Muslim youth in Europe has shown me that violence among them is largely due to the fact that they cannot recognise themselves in the values of the countries where they live, rather than because of religious fervour… Religion is often only a demarcation line in their attempts to negotiate their sense of identity in today’s difficult European context…. A criminal or a terrorist is not only the product of Islamic culture, but also of the French republic – of its schools, its migration policies and its social fabric.

His warning must be heeded. However, the conflict continued after the firebombing, after the Charlie Hebdo massacre, after the attack in Garland, Texas, after the execution of Samuel Paty, after the restrictions on Muslim organisations, after the assault on Muslim women, and promises of “war legislation.” Now, after the state’s intervention creating separateness of the Muslim community, the state must give protection as it flaunts its own law that should protect the community.  It’s a conundrum. This unfolding narrative has become a meme, a continuing stand-off between ideological republicanism vs. the principles of a minority community.

“Never let a good crisis go to waste,” Churchill said.  In an outpouring of nationalism inspired by grief, horror and indignation, Macron rose magnificently to the occasion conferring posthumous honours on the victim of the execution. The nation rallied.  The enemy was named: radical Islam, terrorist, separatism.  While Macron never used the term, Islamo-gauchisme became a meme in the press lumping “leftism” with Islam as a threat, timely in the era of Yellow Vests. Contradicting the secularist laws of the first decade of the twentieth century, laws were drafted and passed even to the extent that any association may be punished for an act of one of its members in contradiction to individual human rights.  The government assumed powers of decree in the fight against the common enemy taking a step to the right.  Surprisingly, the Communist Party of France and the socialist LFI of Mélonchon supported Macron in the nationalist frenzy.  Macron was the warrior supreme for all republicans, a strong role with an election coming in 2022. (3)

Of course, his opposition was not silent.  Calling radical Islam a “warlike ideology,” National Rally leader, Marine Le Pen has called for “war legislation” to compete with her rival, for her battle is not only with Islam but with Macron whom she would best.  (4)

A common enemy unifies people. While the Yellow Vest protests have underscored the economic and financial crises of capitalism as they rally against austerity and privilege, a gasoline tax and inequities, the traumatised French population gathered en masse in unified nationalism.  They confronted the Muslim enemy, alleged radical separatism which, in some aspersions, is somehow leftist Islamo gauchisme.  What, then, is left of solidarity of the Arab working class with the general population? They have been dismissed with a word in the current rightward trend. The religious rights of Muslims need to be included. This is not limited just to Muslim students but to Arab workers who compose 3.3% of the French population.

One must empathize with the young, for this is the troubled ground on which they are to be nurtured.  While they may not be victims in this fury, these innocents, it all began with a lesson designed for them.  They deserve more respect.

Having taught many Muslim youths in middle-class Ontario schools, I see them as I see all students – a wonderful mix of characters engaged in school life.  They were not separate, but engaging and respectful, even with an unusual role I played.

Following 1987, upon the Ontario government’s having included sexual orientation in the Bill of Rights, I became program director and implementer of the Anti-Homophobia Action Committee for my board. Because my home school was strongly composed of Muslim students, I was warned by colleagues, “You can’t do that with these kids.”  I did.  Furthermore, as the teacher in charge, I was uncompromisingly “out,” presenting the students with assemblies on human rights and hate crimes.  Happily, as the “out” gay teacher, I had never a sideways glance, rude remark, snigger or any slight from any of those Muslim youths.  They deserved the respect they gave. No, the Charlie Hebdo image would not have been welcome in my classroom.

It’s universal: no student must be humiliated and marginalised.  The consequences may be catastrophic.  As Ontario’s Ministry of Education prescribed as my career began, the teacher must act as a “kind, firm, judicious parent.”

What must teachers do?

A “kind, firm and judicious parent”?  I cannot find one of those qualities in those cartoons, for school must become a locus of learning and growth to prepare the productive citizen. Admittedly, a middle-class Ontario school is some distance from a Parisian banlieue; however, the universal mandate is that all students must be safe, welcome and secure in the educational establishment. Alienation must be avoided, for that will bring disaster for these kids of whose perilous journeys to the West I have only hints.  The singular function of the school must be graduation, a source of dignity and pride in their new country.

The far, far better lesson must be grounded on Martin Luther King’s admonition in his speech in the Riverside Community Church on April 4, 1967, a year to the day before he was assassinated.  “Be neighbourly.”

Compare the two, Charlie vs. Martin. Who benefits?  Cui Bono?

While this short work may be thought to be an attack on the original principles of French secularism, it is not.  Of course, ideas must be discussed openly on freedom of speech in class – with sensitivity to create civil dialogue, mandated from ministries of education.  I maintain that the cartoons did not have to be shown, perhaps mentioned. Who in France would not have known about them? Such images are the red line for that already marginalised community which must not be used as a political tool. Reasonable accommodation with respect for the young must be for any teacher the fundamental moral principle.

Need a lesson on freedom of speech? How about Julian Assange to whom France will not give asylum?

Furthermore, I applaud the separation of religion and state when it is done fairly and equitably, in the spirit of Liberté, Egalité, Fraternité when applied with respect, especially to youth who are so easily alienated from authority. They are our future, and we can’t afford not to.  I recommend the policy in more countries and jurisdictions, East and West, even my own Province of Ontario where the Roman Catholic Schools, and only that religious group’s schools, are funded publicly.  I say remove it.

Having graduated from the University of Western Ontario in 1967, David Gamble spent the next fifty years teaching humanities at the high school level in Ottawa and Toronto, Canada. In the nineties, he led the Ottawa Board of Education's Anti-Homophobic Action Committee. Upon retirement, he self-published an ebook School Whisperers based on his experiences. He continues his reading, primarily, history and fiction, and writing.