Home / Flashpoints / AMLO IS NO SOCIALIST: THIS TIDE ISN’T EVEN PINK! 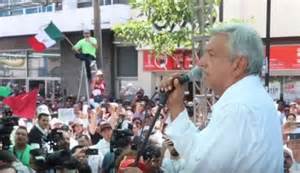 In this world crisis of capitalism there are traditionally two responses, socialism and fascism. If you look at Europe and the United States it appears that fascism is winning. In the face of this, it is tempting for leftists to read more into electoral victories than is there. This article shows some of the many reasons why AMLO is no socialist. AMLO was further to the left in 2006 than he is now, in spite of the fact that world capitalism has gotten much worse for most of the Mexican population. This doesn’t mean his presidency is worthless, but if we want our tacos  with picante sauce, we will have to look elsewhere.