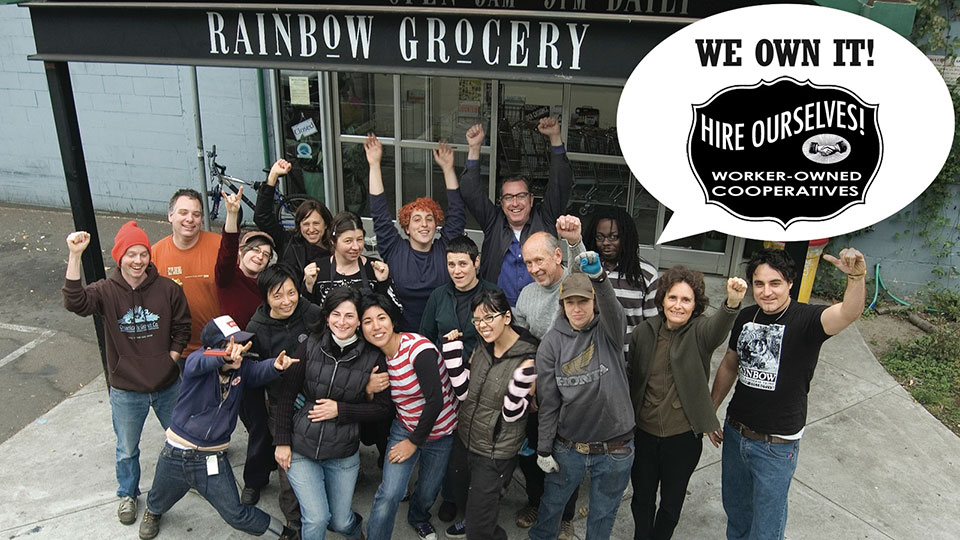 In this picture advocates for worker cooperatives celebrate outside City Hall in Oakland after the city council passed a resolution supporting the development of democratic and equitable workplaces on September 8, 2015. (Sustainable Economies Law Center)

In the San Francisco Bay Area alone we have all types of cooperatives and collectives.

NoBAWC (pronounced No Boss) http://nobawc.org/ is an organization that supports and connects worker cooperatives in the Bay Area.

The US Federation of Worker Cooperatives http://www.usworker.coop/ is a grassroots membership organization for worker cooperatives all over the United States.

Other examples around the U.S. include Evergreen Cooperatives http://evergreencooperatives.com/ in Cleveland, Green Mountain Spinnery in Vermont http://www.spinnery.com/, Community Builders in Massachusetts  http://www.communitybuilders.coop/ and Isthmus Engineering and Manufacturing in Madison, Wisconsin: http://www.isthmuseng.com/

Grassroots Economic Organizing http://www.geo.coop/ is a weekly newsletter which provides readers with the latest news about coops around the United States and other countries.

Democracy at Work is a movement for social change and an organization that supports and educates the public about participatory democracy through its website, lectures by economist Dr. Richard Wolff and media appearances on shows like Bill Moyers, Bill Maher, and weekly syndicated, Economic Update public radio broadcasts. http://www.democracyatwork.info/