Home / Perspectives / Now is the Time for a Second Party 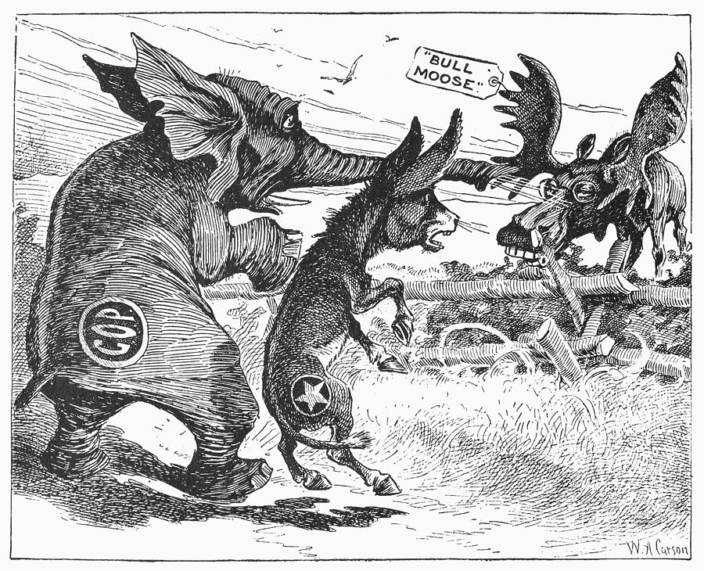 Today, who is a Democrat? Who is a Republican? Is there really a difference?

It is no secret that the current electoral system in the United States is rigged. The two hegemonic capitalist parties have made it nearly impossible for other parties to participate in elections. The first hurdle is simply to gather sufficient signatures to get on the ballot. A national candidate is obliged to go through this daunting procedure in each state. Furthermore, each state has its own rules for ballot access.

During the 2016 electoral cycle, for example, the third largest party in the United States, the Green Party, spent $800,000 to get on the ballot in nearly all the states. Their electoral success was sufficient to gain a ballot position for the 2020 cycle in twenty-one states. They are currently pushing their Sisyphean rock up in the remaining states with a guarantee that they will have to do it again in 2024.

After all of this effort, the Greens garnered about 1% of the vote and the furor of ignorant Democrats, who blamed them for Hillary Clinton’s loss. The Greens are not why she lost, but they are a convenient target for those not gullible enough to swallow the Russian interference excuse.

Not only have the capitalist parties stymied attempts by other parties to get on the ballot, but they, or at least the Democrats (it’s not clear how Trump became the Republican candidate) strictly control who can become their presidential candidate. Bernie Sanders decided to make two presidential bids through the Democratic Party apparatus. It was a good choice for one major reason: under current circumstances had he run as an independent or on, say, the Green Party ticket, nobody would have heard what he had to say. He would never have filled auditoria and stadia to overflowing. He would never have made social democratic policies the focus of the Democratic Party primaries and given hope to tens of millions of citizens. But he never had a chance of becoming the Democratic Party’s presidential candidate.

I realized from May 2015 that Sanders hadn’t a chance of winning the nomination, not because he couldn’t win enough delegates, but because the Democratic Party would make sure, by whatever means necessary, that he couldn’t win enough delegates. The reason for my assessment was that the capitalist class in the United States, and the rest of the world, was in no mood to accept improved living standards for the American working class. In a climate where NAFTA had been in effect since the Clinton administration, millions of industrial jobs were being moved to cheap-labor countries, the New Deal had been under capitalist attack since its inception, and there had already been two major recessions in the 21st Century, what could possibly motivate the capitalist class to offer concessions to the working class?

Did you know that in the early years of the Republic the two parties were the Democrats and the Whigs? Then, within a very short period the Whig Party disappeared and was replaced by the GOP. Presto! Party A dies and is rapidly replaced by brand new Party B. That seems to be the only way that a new party can become a contender in the American system.

Here, in brief, is what happened. In 1852, when the question of slavery and the creation of new slave states was a heated issue, the Whig Party split. The pro-slavery faction migrated to the Democratic Party, which represented the slave owners. In 1854 the anti-slavery faction and others went on to form the GOP. During the remainder of the 50s the GOP won elections, and in 1860 it captured the presidency under Abraham Lincoln.

The essential thing to understand is that before 1852 there were two hegemonic capitalist parties. The United States was in the early stages of becoming an industrial power, having been essentially agrarian since its beginnings. The Democratic Party, founded by southern planter Thomas Jefferson, by and large protected the planters’ interests. The Whigs, on the other hand, were a mixed bag, based largely in the northern states, which were not as wealthy as the South. However, that is where the Industrial Revolution was making inroads, much to the consternation of the planters.

The planters’ capital was tied up in slaves, who produced their wealth, and land that the slaves worked. The emerging northern industrial capitalists, however, needed free wage labor – free in the sense of being available to work when there were orders and unemployed when there weren’t. The industrialists had no intention of feeding and housing the working-class year in and year out whether there was work or not. Furthermore, the North had a labor shortage. The last thing the northern industrialists wanted was for additional states entering the Union to be allowed to use slave labor.

Under the pressure of the slavery issue, the Whig Party split essentially along regional lines: southern Whigs found a comfortable new home in the Democratic Party. Northern Whigs were left with a rump party, with no ability to contest an election against the Democrats. That is where the brand-new GOP came on the scene.

Prospects for a New Second Party: Can History Repeat Itself?

Let’s return, now, to the current situation. Sanders’ 2016 primary campaign made it apparent that a significant segment of the electorate was delighted to vote for progressive candidates, who were winning elections up and down the ballot. These candidates were often running as Democrats and gaining seats in everything from city councils to Congress. The group-think was that the progressives would take over the Democratic Party and make it into a party of the people. I realized that the Democratic Party would not allow a takeover or even a significant change of course. The Democratic Party, just like the Republican Party, belongs to capitalists, just as does almost everything else in the country.

The DNC had already settled interloper Sanders’ hash, and long before that had turned the wave of progressives that entered the party in the 60s and 70s into tame cattle. I refer to the Black and Progressive Caucuses. Here’s the deal: if you want to have influence, such as important chairmanships you have to toe the party line. If you don’t want a DNC-approved candidate to primary you and you do want support for your re-election campaigns, you toe the party line. Buckle under or disappear.

My hypothesis was that the upsurge of interest in progressive policy would split the Democratic Party like the Whigs in 1852. It made no sense to create a third party – the American political system isn’t big enough to contain it and the hegemonic capitalist parties. However, it might be possible to kill the Democratic Party by drawing the viable elements into a new party with a progressive program. The remaining rump Democratic establishment would have nowhere to go but the Republican Party

Currently, a new organization, the Movement for a People’s Party, was attempting to build a broad coalition to form the organic base for a third party. It still exists but doesn’t seem to be very successful. Trump has frightened so many otherwise well-meaning people that they can’t think about anything else but getting rid of him. They would gladly vote for Lucifer to replace Satan in Hell and voting for a third party feels too risky.

So, my hypothesis had the migration going in the wrong direction. In recent weeks we have seen lots of “Republicans for Biden” activity with the support of establishment Republicans and their donors. Wall Street is pitching Biden and abandoning support for Trump. But the icing on the cake is that four Republicans were featured speakers at the Democratic National Convention, and that the progressives were frozen out. AOC got 60 seconds. Sanders got a sadly capitulatory keynote address.

How do we get there from here?

The GOP and Democratic establishments have always agreed on the big issues of empire and wealth distribution. They have lost their party to Trump, but all he inherits is the lunatic fringe base, which has no money to maintain the party’s infrastructure. This base will disintegrate when Trump leaves office.

So, it looks like the GOP establishment is migrating to the Democratic Party and bringing their big donors with them. Progressives can no longer pretend that they have any power within the Democratic Party. By the same token, if Trump is re-elected, his second term will be hemmed in by the massed might of the capitalists, who can stymie every move he makes.

The US will soon have an official one-party regime, the Democratic-Republican Party. That leaves us the opening we need in which to create our own party, a real opponent to the capitalists who have, up until now, held a monopoly on power. Our party won’t just be an electoral vehicle. As long as the capitalists control the country, there is little that working-class people can win through elections. In this conjuncture, where the third major economic collapse of the century coincides with a major pandemic, people are angry and ready to move at the least spark. The George Floyd uprising won’t be the last, and every uprising that follows it will provide larger and larger populations experienced in mass non-violent civil disobedience. That will be the environment for creating a mass party of the people and for ridding ourselves of an oligarchy whose time has passed.

Our party’s leadership will rise from among the leaders of converging movements of mass civil disobedience. In particular, movements for rent relief, debt relief and $15 an hour, BLM, and workers and teachers refusing to sacrifice their lives to COVID-19 will spark action from other sectors of the working-class. These movements will shut down the capitalists’ drive to return to “normal”. The new party’s program will be the demands that arise from these movements. It will achieve its ends the way successful revolutions achieve theirs: replacing the current rulers with our own selves, eliminating the middlemen, and reducing the capitalist class to working for us.

Today, the capitalist parties have no mass memberships. They only have employees who work for private corporations like the DNC. The citizenry can choose a fictitious affiliation with one of those parties at voter registration, but ordinary citizens have no say in how the parties function or who the candidates will be. Candidates used to be chosen in smoke-filled rooms; today they are chosen in smoke-and-mirrors primaries.

A people’s party should differentiate itself clearly from the phony parties. Party membership should be based on formal agreement with the party’s goals and a decision from a membership committee. Card carrying is an honorable party tradition that demonstrates the member’s commitment to the party. Dues cement the commitment and provide the essential money to maintain and grow the machine.

The time is ripe to form a party of the people. In the meantime, watch for a purge of progressive Democrats in the near future.

John Schoonover cut his activist teeth in the Civil Rights and Anti-Vietnam War movements. The latter earned him 9 years of exile in Canada evading both the draft and an indictment. Freed of these burdens during the late seventies, he returned to the US and continued as a socialist organizer. His PhD in nuclear physics and his socialist outlook led him to advocate the expanded use of nuclear energy, despite the growing propaganda war against it. After several decades in France pursuing a career in computer security, Schoonover returned to the US, where he is actively organizing for a socialist solution to the current crisis.