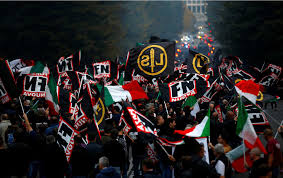 After all Europe has gone through in the 20th century with fascism in Spain, Italy, Germany and Greece we would think that if any continent in the world would see through fascism it would the Europeans. But no. In Germany, the Netherlands, Greece and Italy many workers still haven’t learned. The other disappointment in Europe is that for all its history of anarchism, council communism, and marxism, there hasn’t been anything further left than tepid social democracy. In Italy the rejection of centralist politics has opened the way for the right, not the left.

Read in libcom.org
Image from alamy.com