Home / Flashpoints / Coalition of the Desperate: France and India Pander to Yankee Cyclops 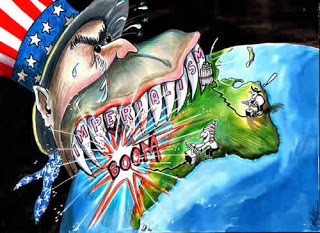 Yankee empire desperately watches as China and Russia build infrastructures, harness energy and build alliances based on Marx’s dictum to ‘develop the productive forces”. Yankees in a panic call few remaining allies for reinforcements. Who are they? France, has-been minor power whose fate is sinking along with the European Union; India, whose fundamentalist prime minister has 90% of the peasantry against him; India, selling its ports to the highest bidder has agreed to allow French bases on its ports. All this maneuvering is designed to disrupt Chinese trade using the Indian ocean.