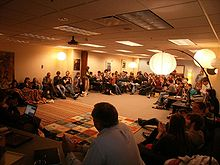 This is a very well-thought-out article on the problems cooperatives face in terms of the relationship between a general assembly (plenary) and delegated committees. Under what conditions should a general assembly be the ultimate decision-maker and under what conditions should delegated committees make decisions?  The article raises hard questions, but as socialists we should be thinking about this now, not after the revolution.