Home / Perspectives / Breslin, Hamill and the Limits of the Mainstream Media 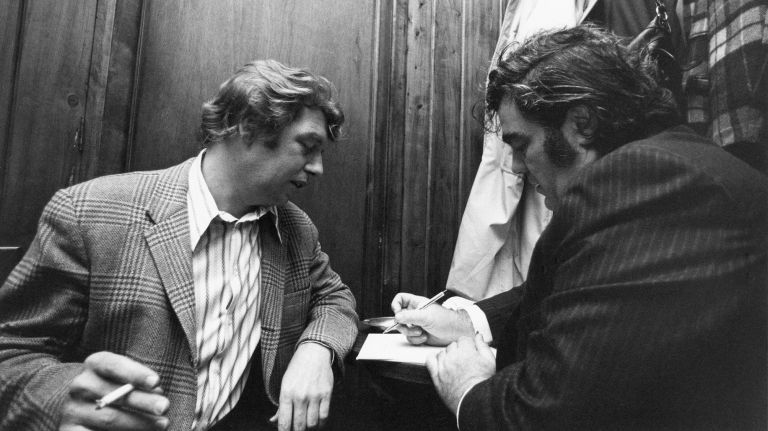 One evening two years ago when I was walking toward Flatbush Avenue to catch the subway, I saw up ahead a man I was quite certain was Pete Hamill. What threw me was that he was very frail and old-looking as he struggled even with the use of a walker and the assistance of a woman who appeared to be a health aide. Perhaps I should not have been surprised; doing the math later, I realized Hamill was 81 at the time. I learned from my sister the next day that it was indeed Hamill, that he had moved back to Brooklyn from the Village a short time earlier, the return of the native son having been much ballyhooed in Park Slope’s neighborhood newspapers.

Hamill had been much in the news immediately prior. Jimmy Breslin had just died and the New York dailies and electronic media were full of quotes and reminiscences from Hamill about his old friend and colleague. That was entirely appropriate, as the two have been closely associated since bursting on the scene almost simultaneously in the 1960s when New York City’s seven daily newspapers were still the primary means by which millions in the tri-state area got their news.

That evening when I caught a brief glimpse of Hamill came back to me recently when I heard about an HBO special, Breslin and Hamill: Deadline Artists. Like many such shows, it’s extremely well-done as far as it goes. It traces their many similarities as journalists and as human beings: both were born into Depression-era Irish working-class families in the outer boroughs before that became fashionable, Breslin in 1929 in Jamaica, Queens and Hamill in Brooklyn in a neighborhood that is today called Windsor Terrace.

Both got hired despite not having graduated from college, let alone journalism school and, after stints as reporters, both became columnists. Breslin is often cited as the seminal figure in what soon became known as the New Journalism. Hamill, of a more literary bent (though Breslin, like Hamill, also wrote novels), similarly captured life among the working-class in New York as the city went through monumental upheaval: a rapid shift in its ethnic makeup, with a dramatic influx of Puerto Ricans and Southern Blacks and the exodus of hundreds of thousands of second-generation Europeans; the devastating rise of heroin; and perhaps foremost, capital flight and the resultant economic ruin of millions of lives as the work once done in manufacturing plants, breweries and factories was relocated to places far away where profit rates were significantly higher.

Reviewing their newspaper resumes is like an archaeological dig of the long-gone and mostly forgotten: the New York Journal-American, the New York Herald Tribune, the New York City edition of Newsday, the pre-Murdoch New York Post that was the only liberal paper of the bunch, the Daily News when it sold 2.5 million copies each weekday and as many as 5 million on Sundays. Given the sorry state of the press in the 1960s, two talented columnists writing about the difficulties of working-class life was a bit of a revelation. While there were as many things to hate about the New York Times then as there are today, not to mention other rags like the Journal-American, what all the dailies lacked most by far up to that time was hard-hitting local coverage of the lives of New York’s millions of workers. A quote from Breslin in the HBO show describes his and Hamill’s approach best: “Just go to any neighborhood where the poor live and tell the truth about what you see.”

It’s what Breslin says immediately after that spells out the limits of his and Hamill’s work, one that underscores the constraints of working in the very narrow spectrum of corporate media: “Please do not put out a sermon. That’s for Sunday.” That’s not really what he means, of course, as he and Hamill did plenty of what could be called sermonizing. What he really meant was not to do certain kinds of sermonizing, of trying to get at the heart of a socio-economic system from which flows pretty much all of the problems they wrote so eloquently about.

Perhaps Hamill’s close relationship with Robert Kennedy, which went so far that Hamill states in the documentary that he was the one who convinced Kennedy to run for President in 1968, best illustrates this notion of the right kind of sermonizing masquerading as not sermonizing. While Hamill laments having done so, saying it was a mistake, what is striking is not the crossing of some journalistic line. Rather, it’s his support for Kennedy at all. Kennedy was a war criminal and a fraud, a cynical faux populist attempting to ride the massive protest sweeping the country to the White House.

It’s telling that, with the exception of a commendable exploration of a nasty episode of sexism and racism from the latter part of Breslin’s career, there is not a single critical voice heard in the documentary. All of the big guns interviewed, from the late Tom Wolfe to Spike Lee to the late Les Payne, take turns in heaping praise onto Breslin and Hamill. More importantly, they sing the glories of the media system that spawned both while foggily lamenting a heyday that never existed.

Nowhere is there a hint of the constraints within which mainstream journalists work, then and now. The impression left is of media corporations that are benevolent and neutral in which someone with enough talent and fight can rise to a point where they can write whatever they want. That is not even remotely true, of course. There is a very real, very narrow spectrum within which certain issues and certain opinions on issues are acceptable and others are most definitely not.

The issue of, say, a vast national corporate media encompassing print, electronic, digital, radio and television where there is not a single socialist voice, in a country where the population favors socialism over capitalism, is never brought up, let alone discussed, during the two-hour show. Nor is the even more astonishing fact that so many millions would come to socialism even loosely defined in the absence of a single such voice anywhere to perhaps clarify and reinforce people in what they know to be right.

The same is evident in how the show examines the work the two men did on Vietnam. While writing with great insight about the deaths of and long-term damage to American soldiers, Breslin appeared unable to see the Vietnamese in any real way. They are subjects, never objects. One never would know that they suffered and died at a scale, to use the wholly inadequate measure of arithmetic, at a rate hundreds of times worse and all a result of the worst international war crime since the Nazis, no less. His work fits comfortably alongside that of David Halberstam, Walter Lippmann and others who earned reputations as “anti-war” solely because of their concern about the costs to the United States.

Hamill, to his credit, did write about Vietnam as a war crime and the men who waged it as war criminals who deserved to be brought to trial. But the best he could come up with as a way to end the war was to throw his support behind Robert Kennedy, one of the war criminals, and by urging anti-war protestors to cut their hair and run for Congress. The everyday millions who contributed to the actual end of the war seemed secondary to him even as he covered some of the largest demonstrations.

Missing were the people in hundreds of places who risked local scorn and even violence to build a movement that eventually proved stronger than the warmakers. Missing, too, was the work of Vietnam Veterans Against the War and other organizations of soldiers and ex-soldiers. Instead, Hamill focused on and mocked the ever-convenient straw man of the Weather Underground type, those he could then safely dismiss as “credit card revolutionaries.”

It’s also striking that there is little attempt in the show to contextualize how Breslin and Hamill were able to forge long careers that made them both famous well beyond New York City, as well as fabulously wealthy. We wouldn’t expect kindred spirits like Tom Wolfe and Gay Talese to point out they did so precisely because they obediently accepted and abided by the system’s constraints, but someone should have. Each progressed very profitably from reporter to columnist to novelist whose books were marketable precisely because of who they had become, to well-paying freelance work at prestigious magazines.

Always, important choices were made. Nowhere in the documentary is there any discussion of those choices and it’s apparent neither of the subjects ever considered alternatives. So while both were on the left-most end of the corporate spectrum, with an important emphasis on the working class, Hamill, for example, chose to write for upscale fluff magazines like New York and Vanity Fair and the overrated Village Voice rather than, say the Guardian, Liberation or Radical America.

The point is not to second guess or even criticize those choices. Nor is to try and retroactively say what either of them should have done. The point is that there were and are many fine writers, dating to Breslin and Hamill’s time and before, including many able to write circles around both, who toil in obscurity working for outlets like this one precisely because they have a commitment to “telling the truth” beyond what either Breslin and Hamill ever imagined. But such writers aren’t allocated nice expense accounts to travel the globe or get to date movie stars and Jacqueline Onassis. The mutual admiration society in the HBO special operates in a world so enclosed that none of this has ever apparently occurred to any of them.

A New York for the Rich

It’s telling that in a New York Post story previewing the HBO show, Hamill replied to a query about the massive, deadly phenomenon of gentrification that’s been plaguing working-class New York for decades and is worsening still, by saying, “It’s better than heroin.” As if heroin and gentrification are the only alternatives. How nice it must be to experience the city from Greenwich Village or Prospect Park West, while out of sight and out of mind are all the hundreds of thousands of workers who have been evicted from their long-time apartments in neighborhoods that, though not necessarily ideal, were home.

The bus drivers and nurses and struggling artists are no longer welcome in New York. Whole colonies of transit workers live in Pennsylvania and commute from there to work in New York for precisely that reason. That Breslin and Hamill, bloated by wealth and apparently unable to conceive of a world where there are other choices besides gentrification and heroin, came to accept that that is what New York has become is a sort of fitting end to their story. Meanwhile, journalists around the world who work on the margins because they cannot be bought, who are rooted in the working class and write clearly about what it’s like “where the poor live,” struggle far from the limelight to tell the truth.